What are you looking for?

If you’re looking for a piece of furniture that makes a statement, one that’s a work of art in its own right, but still serves a purpose, why not consider purchasing a games table? Chess tables, in particular, make an elegant addition to any living space with the room to make it a feature. Once the preserve of the super-rich and nobility, these bespoke pieces ̶ often fashioned in luxury materials, such as hardwood and marble ̶ were commissioned not only for their function, but also as symbols of wealth and status. Today, they are still celebrated for their beauty and practicality, but can also be enjoyed by all lovers of quality craftsmanship. Here’s our guide…

Originating in India, the game of chess has been played for almost 1,500 years. And, did you know that the first chessboard with alternating light and dark squares appeared in Europe as early as 1090? So significant was the game that it is believed to be the subject of the second book ever printed in the English language, when ‘Game and Playe of the Chesse’ was published in the 1470s.

Throughout history, chess sets and boards have been crafted in every material from the most humble to the extremely rare and precious. However, it wasn’t until the 18th century that chess tables first appeared. As the rich and noble began creating specialised, smaller rooms in their homes instead of just having large halls that could be transformed for different uses, the demand for furniture with specific functions took off.

And, with that, came the chess table, a purpose-built furniture item inlaid with a chess board on its surface and often including drawers for storing the pieces. Traditionally round in shape, carved from wood, such as walnut, teak, maple or rosewood, and often featuring polished brass, nickel or marble inlays, these elegant tables became popular among the wealthy families of Europe. By the 19th century, mahogany was the fashionable timber, particularly favoured by cabinet makers as it was easier to work with.

With gambling and card playing growing in popularity, games tables became more elaborate and different shapes were introduced. Some even served dual purpose, with swivel table tops featuring a chess board on one side and tooled leather or green baize on the other for playing cards. Even more unusual designs appeared throughout the Victorian and Edwardian eras, as the games table became an entertainment essential in the homes of the aristocracy. 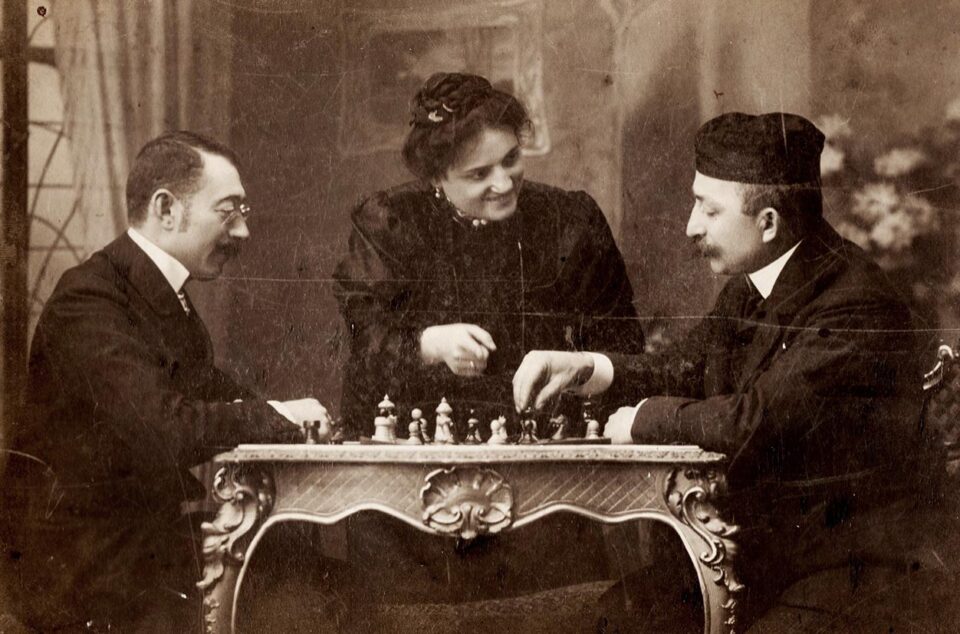 Not surprisingly, the chess table soon found favour with royalty, too. Queen Victoria is said to have been a superior player, often finding solace in the game during her widowhood, and both Edward VII and George V were keen players. Indeed, some of the most beautiful chess sets and tables can be found at Windsor Castle, including an Oriental set crafted in gold and ivory and encrusted with rare and precious stones, with a matching table of exquisite colouring and workmanship.

What to Consider When Choosing a Chess Table?

Chess tables come in all sizes, styles, shapes and materials so there are a wealth of options to choose from. Here are a few pointers on what to look out for when purchasing one.

As well as the traditional-style, antique chess tables available today, there are many more modern, sometimes quirky, designs to choose from. It really is down to personal preference. You can even have a table customised to your own specifications. Here at Davidson, all our games tables can be made to suit the specific size and finish you require. For example, our elegant Aldridge games table, with inbuilt chess, backgammon and card-playing area, can be made in a wide range of Davidson’s fine finishes, with options for polished brass or nickel detailing. For example, you could choose sycamore black or dusk, depending on whether you want a light or dark finish. 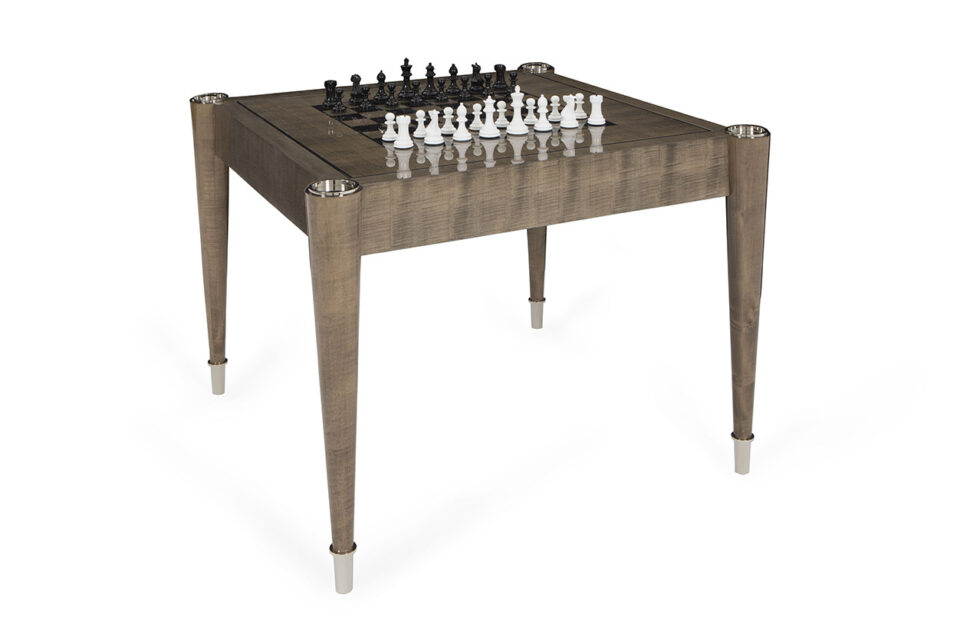 The Aldridge Games Table in Sycamore Dusk and Polished Nickel 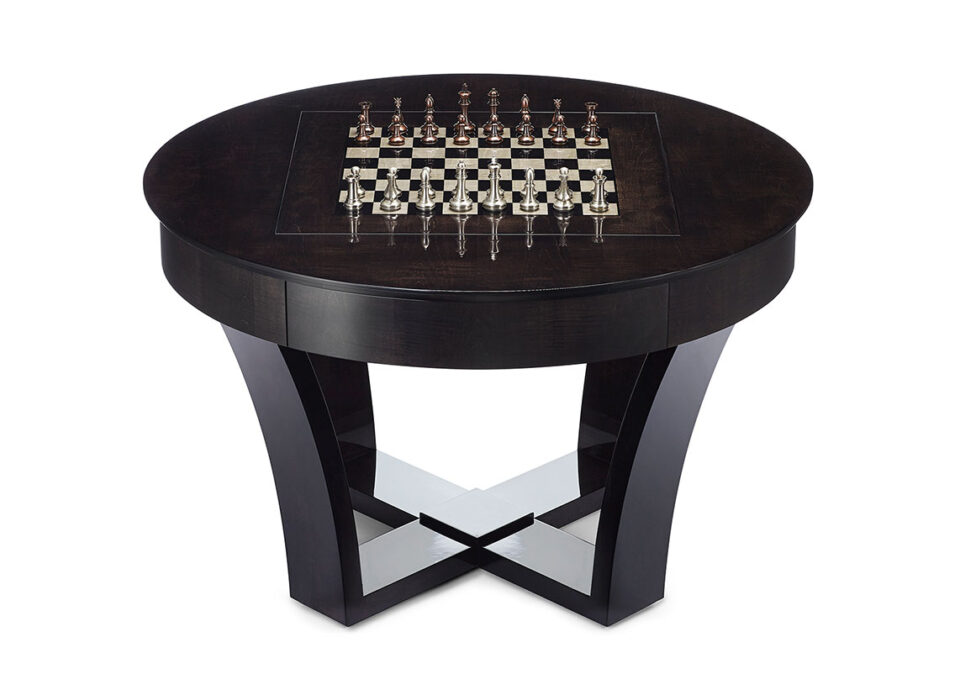 Most chess tables are either round, square or rectangular, but some more unusual shapes are also available. If you do have your heart set on something specific, just make sure that the table you would like can be made that way. Round tables tend to take up less space than square or rectangular, so it’s worth considering if your room isn’t particularly large. Check out our Art Deco-inspired Babington games table, which features a round top with central inlaid chess board on one side and grey wool felt for card playing on the other. At Davidson, we can also advise on the correct size of the piece to suit your floorplan.

Some tables come with drawers to house your chess pieces, while others only offer a flat playing surface. Again, it’s down to personal preference. Do you like to have your set on display at all times for decoration? In which case, storage isn’t really necessary and allows you to have a sleek silhouette without the drawers. Or, would you prefer to neatly store your pieces between games to prevent accidental damage? The choice is yours. Our beautiful Grafton games table boasts two flock-lined drawers on soft close runners with a finger pull opening. 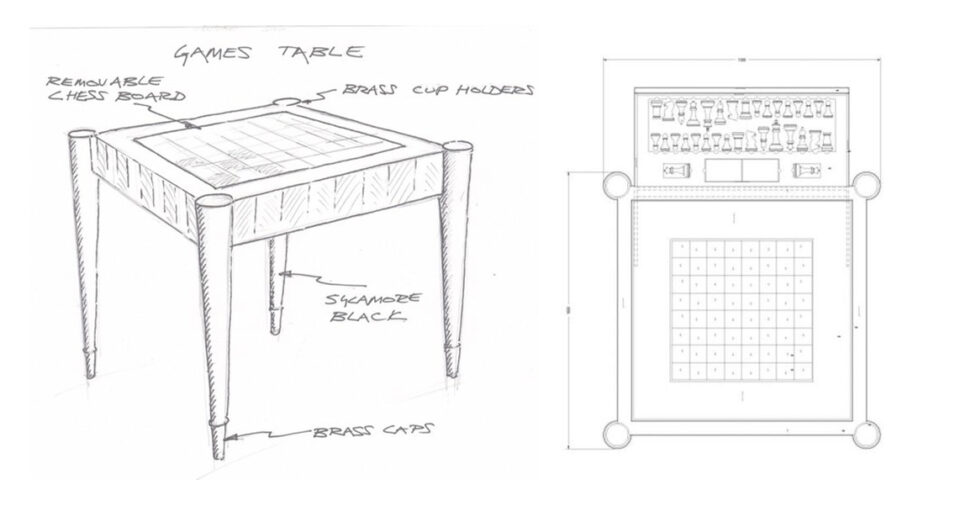 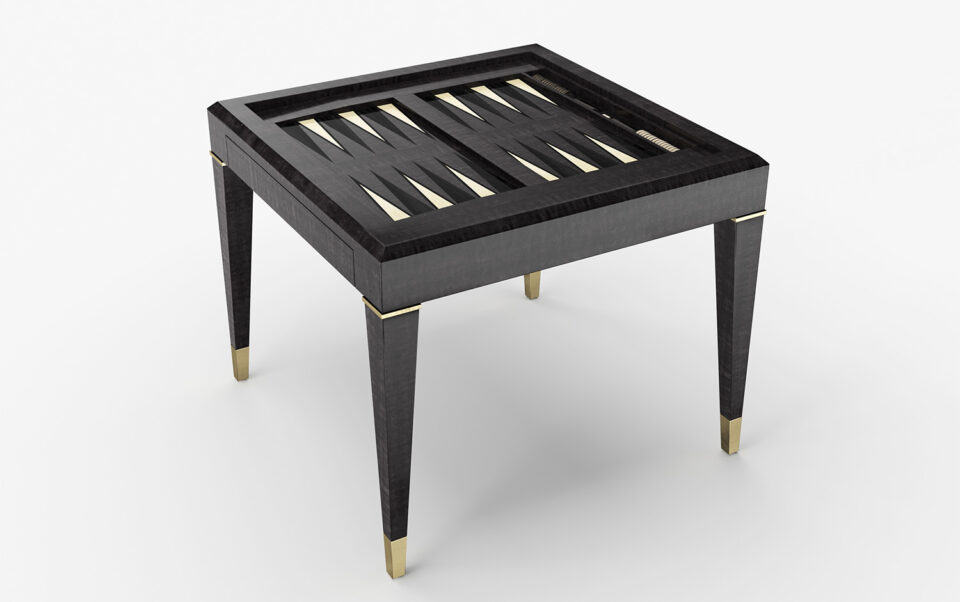 Your budget may prove the deciding factor in purchasing a chess table. If you are set on a truly bespoke design, that will come at a premium. If your tastes run to the more mainstream, there are plenty of options available in various price ranges; you just need to do your research. This is a one-off piece that will last for years, so it’s worth going for the very best you can afford and not settling for an inferior table, even if that means saving up until you can buy the one you really want.

Some of Our Favourite Chess Sets

For a modern twist on a classic look – and a bit of bespoke design to boot – we adore Geoffrey Parker’s Staunton chess sets. Adored by luxury brands and chess champions alike, Geoffrey Parker has been making chess sets for 60 years, including the set used in the famous 1972 World Championship battle between Boris Spassky and Bobby Fischer.

Handbound in leather on their signature scalloped-sided plinth, the Staunton chess commands attention. The plinth can be made from in a range of vibrant colours from the company’s specialist gaming calf leather or exotic water snake, across a range of sizes. You can also choose your style of chessmen.

If you love contemporary art as much as you love chess then we love Purling London’s art chess sets. Each one is hand-painted by a specially commissioned British and international artist, including Sophie Matisse and Thierry Noir. No two sets are quite the same and each one comes with a numbered certificate signed by the artist. This Tom Hackney x Purling London art chess ‘Retinal Chess’ set is a glorious mix of class black and white chequerboard finished with a deep gloss lacquer and a pop of colour from the chess pieces.

For another classic board with a contemporary twist, check out the Aerin shagreen chess set at Harrods. It’s the perfect combination of timeless style and the very latest design. Crafted by Aerinhas from inlaid burwood and presented in a shagreen box, the board retains a traditional style while the brass pieces have been given a modern look with streamlined shapes finished in black and gold.

Or, why not check out the sophisticated Alghero chess set available from The Regency Chess Company? Expertly crafted in high-grade onyx marble by Italian makers Italfama, both the board and pieces have been finished and polished to an exceptional standard. And, every set is unique, with its own swirling patterns and textures created by the natural marble. 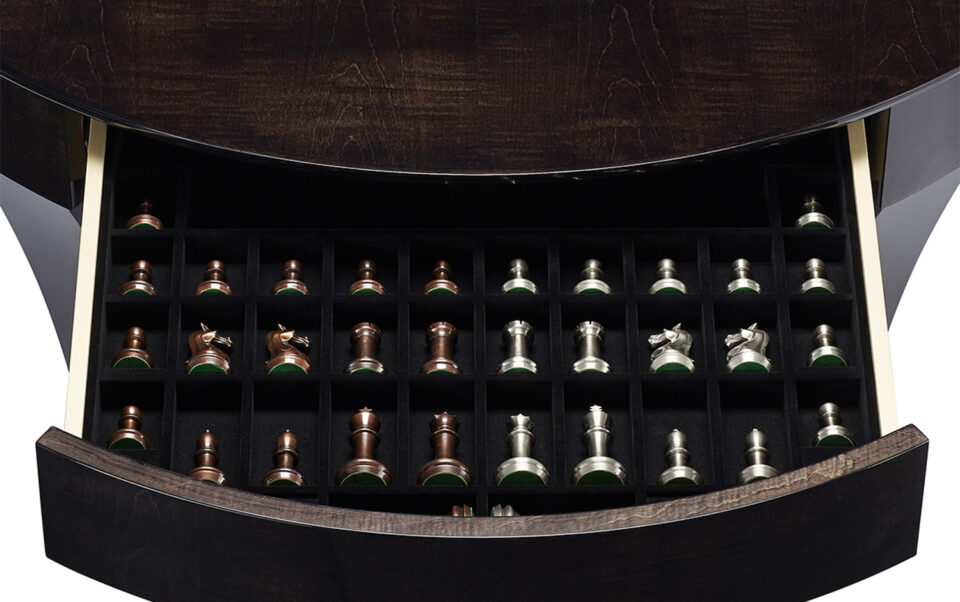 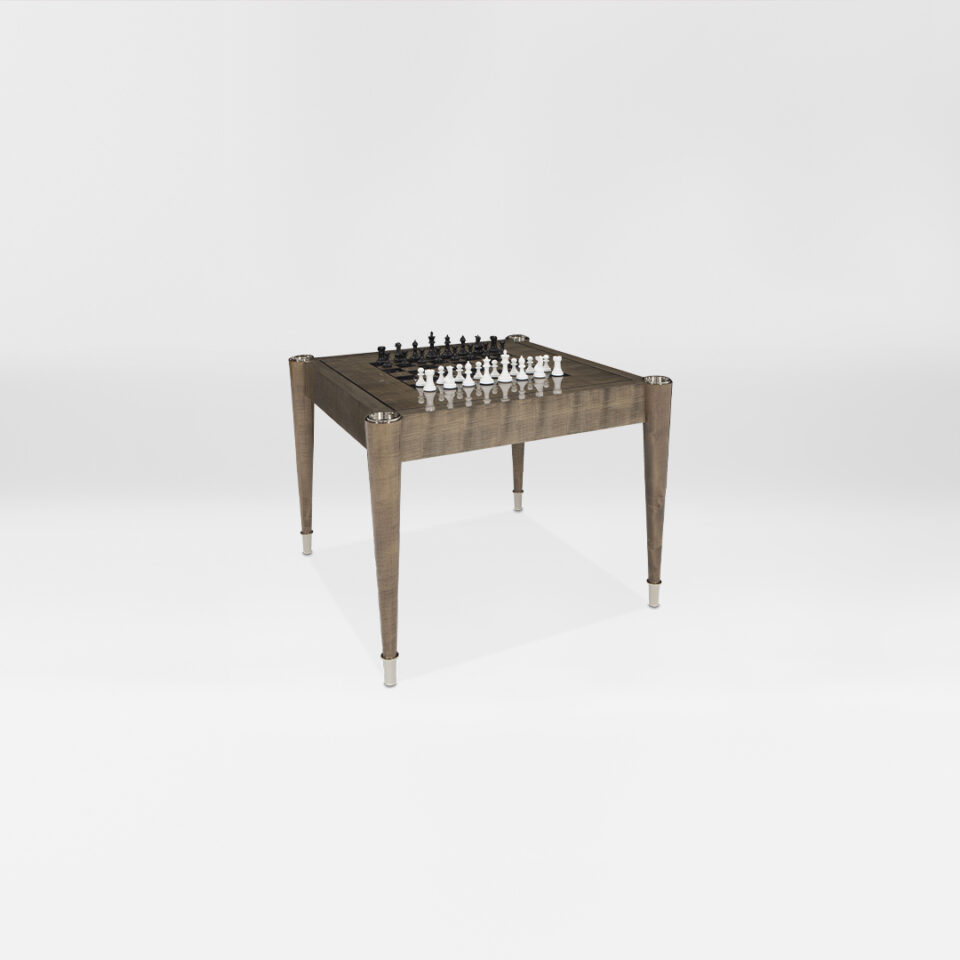 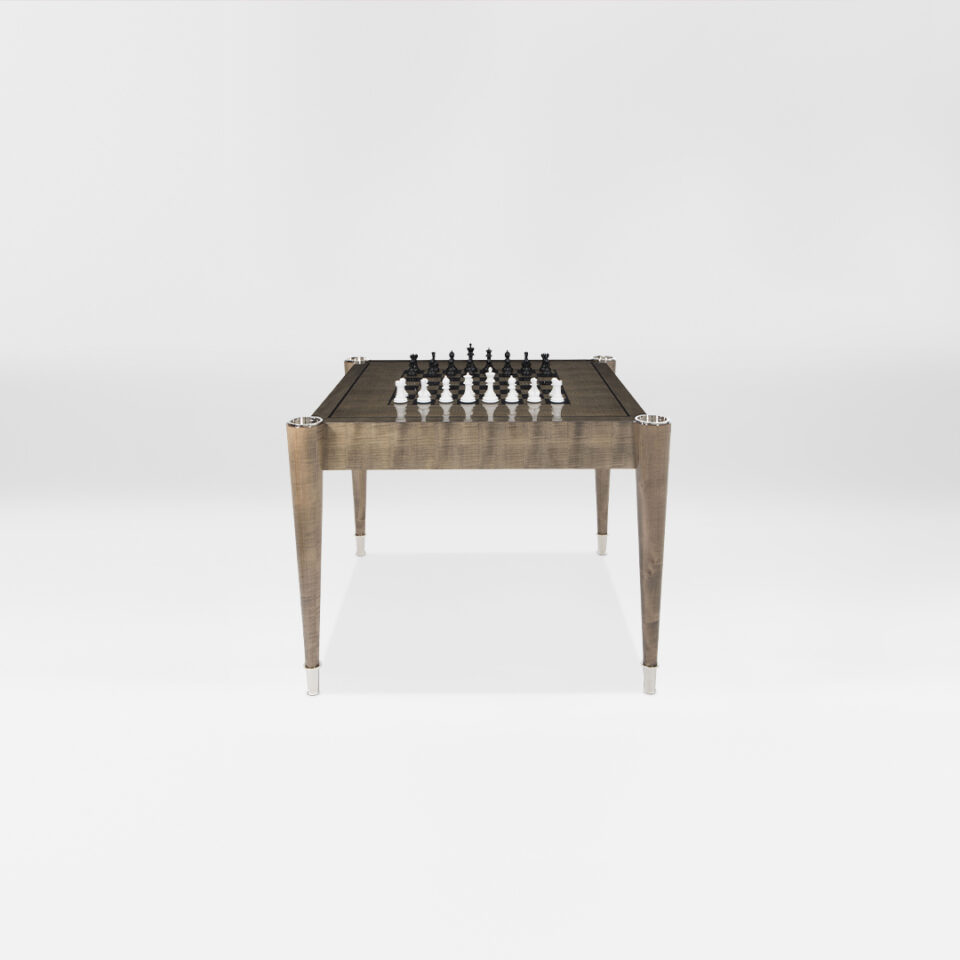 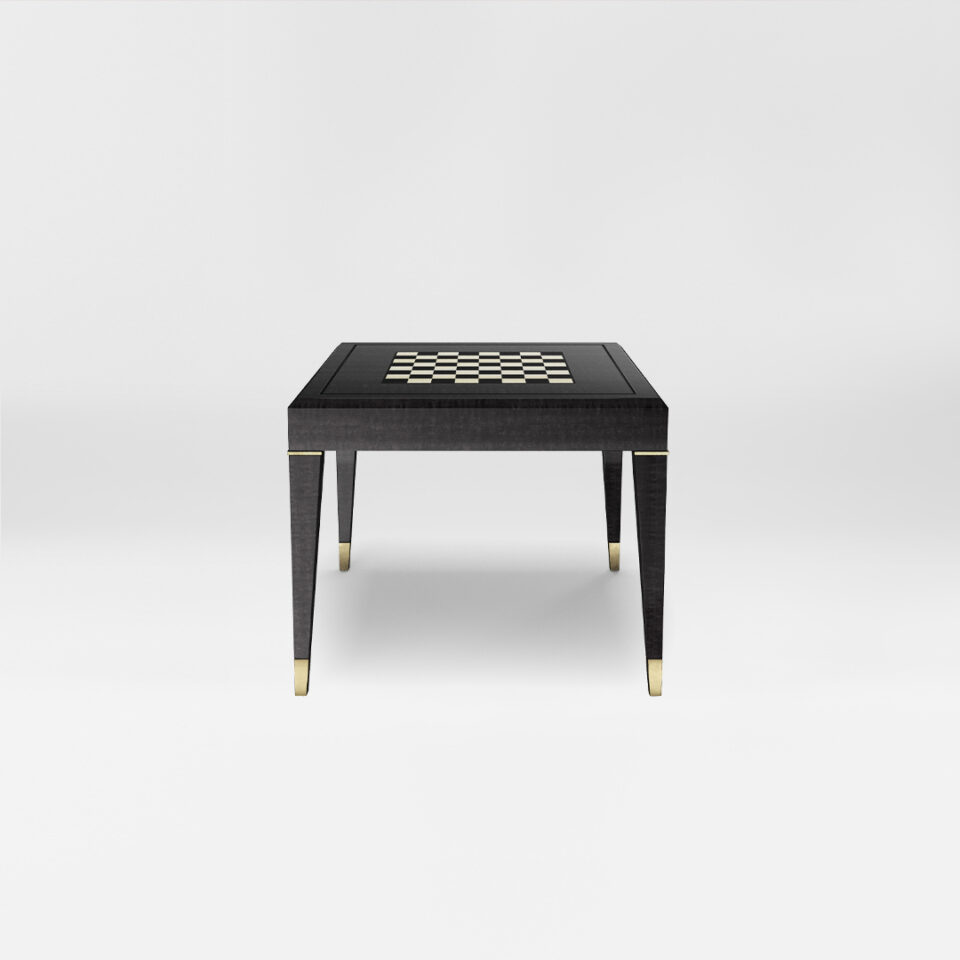 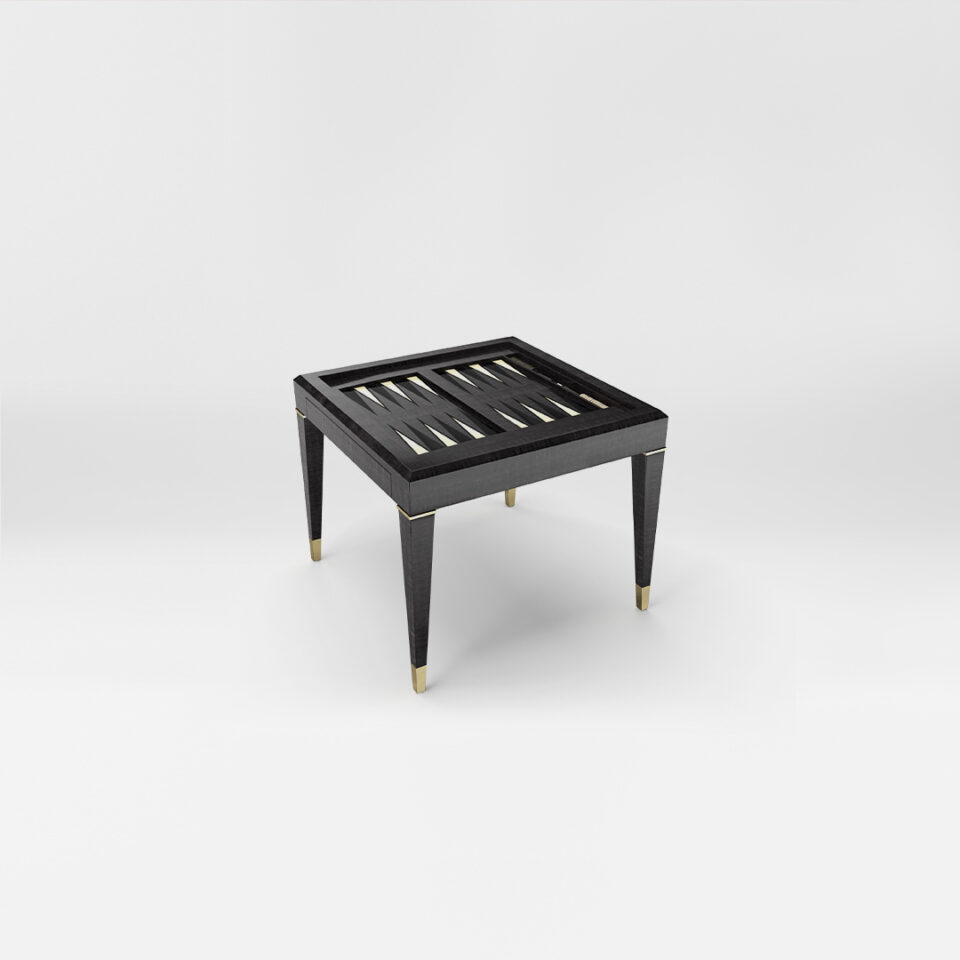 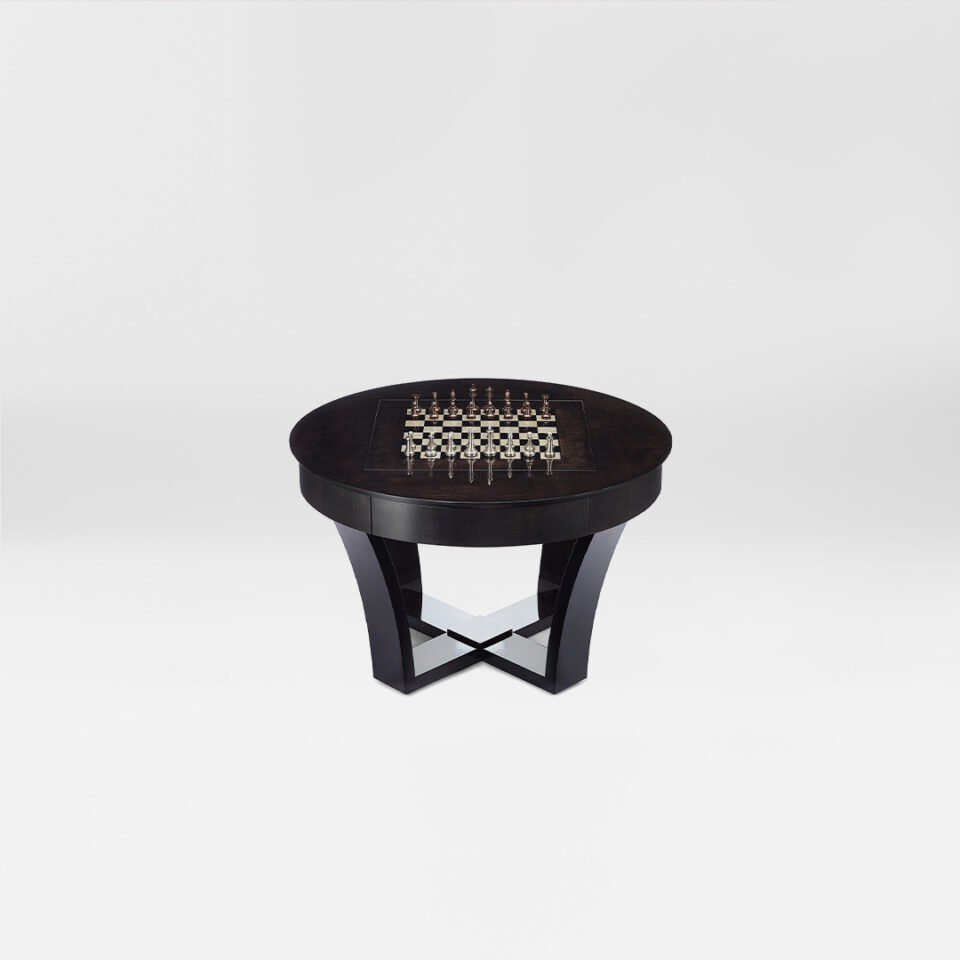